What is resilient turf?

Resilience can mean a lot of different things to turf managers. Some managers will be looking for improved tolerance to environmental pressures such as temperature and drought stresses. Others will be seeking improved tolerance of pests and diseases. Resilience could also be described as improving resistance to physical wear or providing better anchorage of the playing surface. Resilient turf should also recover more rapidly from environmental stresses, ultimately providing a better quality playing surface that is easier to manage. Central to each of these definitions of resilience is the importance of the size and health of the turf’s root system. Healthy, active roots not only anchor turf, they also provide better stress tolerance, have been shown to improve recovery rates and will allow the turf to make the best use of water and nutrient inputs.

The life of turf

The physiology of turf is quite extraordinary, especially when we consider that a very small leaf surface, particularly in the case of fine turf, can provide sufficient photosynthetic activity to support an expansive root system. The main function of roots is to provide anchorage for the turf surface while absorbing the bulk of the plant’s moisture and nutrient requirements. Once absorbed by the roots, water and moisture are transported up to the shoots and leaves and used for photosynthesis. Nutrients derived from fertiliser are also used in structural components of the plant. The main purpose of the shoots and leaves is photosynthesis; water derived from the roots are combined with carbon dioxide from the atmosphere. Using the sun’s energy, they are combined to create glucose sugars – the main energy source for the plant. While some of the photosynthesised sugars are consumed locally to provide for shoot growth, a large proportion are transported down to the roots to provide energy for root functioning and growth.
The stem, while physically supporting the leaves is also the main transport hub for the plant. Turf shoots contains two types of microscopic tubes that transport water and nutrients up into the shoots (called xylem) and sugars from the leaves down to the roots (phloem) (Figure 1). Twenty-four hours a day the turf plant will be transporting and redistributing nutrients, sugars and water via these tubes, which act like highways within the plant. 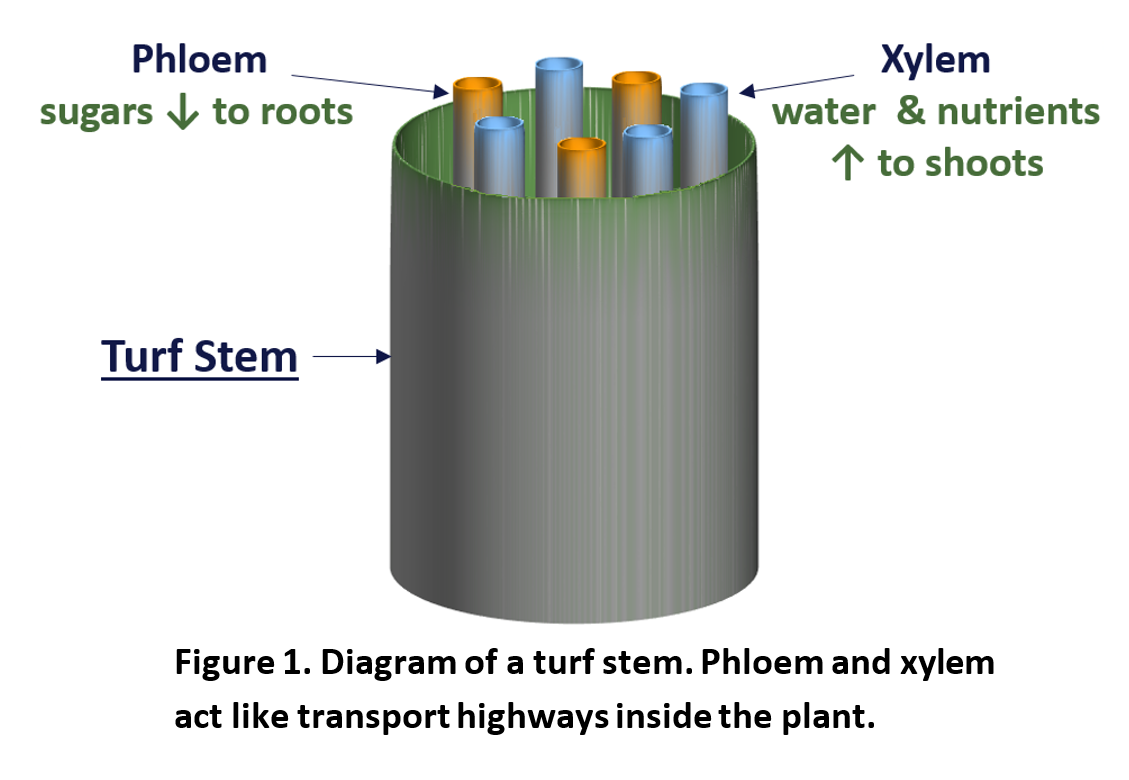 The sugars made in the leaf during photosynthesis need to be transported across membranes to get inside the phloem tubes. Sugars cannot simply diffuse across a membrane so they need to be pumped across using a process we call “co-transport”. During co-transport, hydrogen ions assist the sugars to move across the membrane (imagine a lollypop person assisting people to cross at a school crossing). Why do we need to know this? Because the nutrients we deliver in fertilisers play a critical role in this process. Two nutrients in particular, magnesium (Mg) and potassium (K) play an essential role in powering this pumping mechanism and deficiencies in the nutrients can shut down the movement of sugar throughout the plant (Table 1), which will have serious implications for turf root growth.

Sugar accumulation in the leaves

There is growing evidence that sugar accumulation in the leaves can favour the development of pests and diseases. When publishing their research on Mg deficiency, Huber and Jones (2013) argued that the accumulation of sucrose in leaf tissue provides an environment that is favourable for various pathogens and pests. This actually makes a lot of sense given that pests and diseases such as fungi are attacking leaves to extract sugars to be used for their own growth and development. Accumulation of sugars in the leaves under Mg or K deficiency would therefore favour plant diseases while lowering root growth and the overall resilience of the turf.

A number of our own trials have confirmed this effect. For example, trials independently managed by STRI in Europe found that turf treated with Sierraform GT (containing both Mg and K) was less susceptible to take all patch (only 3% affected) compared to the un-fertiliser control (12% of the turf surface affected) (Figure 2). 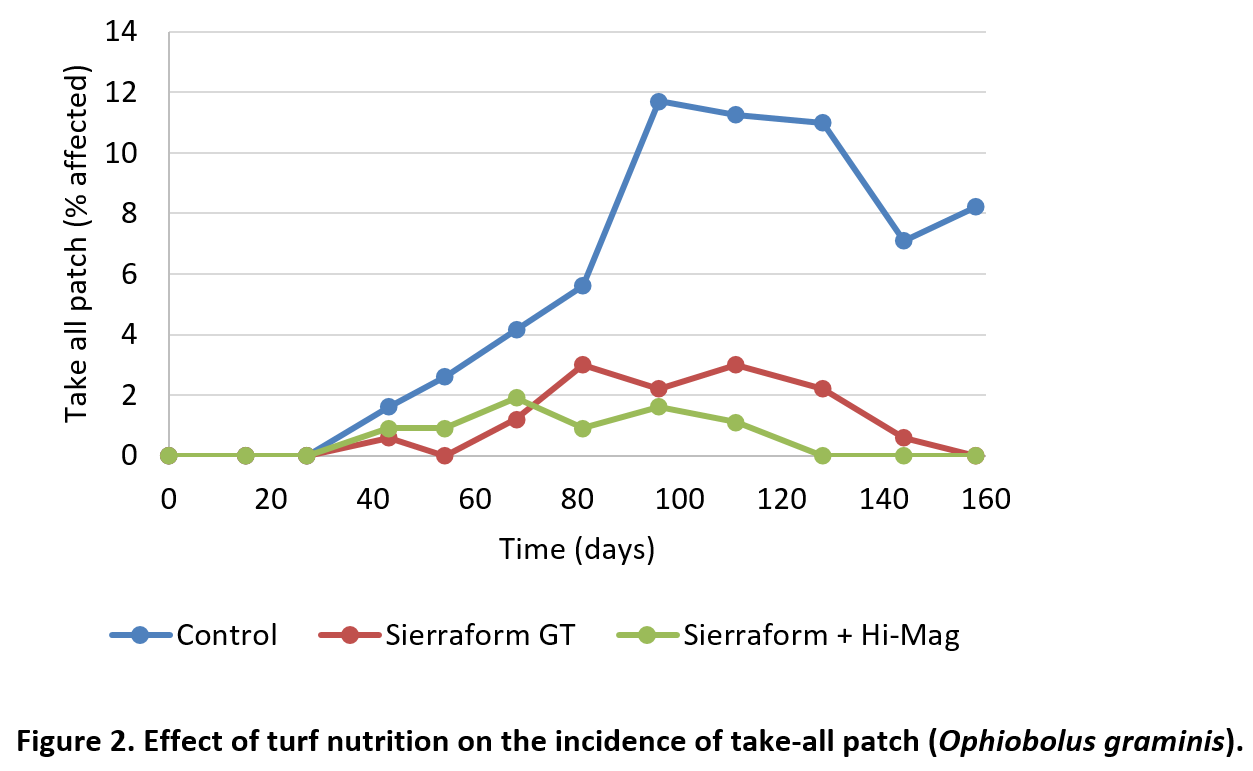 In a separate study, susceptibility to fusarium patch was directly related to the nutrient status of the turf and management of the root environment (Figure 3). A compound NPK fertiliser (without Mg) reduced disease incidence by 10% versus the unfertilised control. Sierraform GT, which contains magnesium, reduced disease incidence by 30%. Adding iron fertiliser reduced disease pressure by an additional 30% and improving the root zone by using a wetting agent, in addition to Sierraform GT and iron, reduced the incidence of fusarium patch by 70% (Figure 3). The fertilisers did not directly control the disease but produced healthier, more resilient turf that was less susceptible to disease pressures. 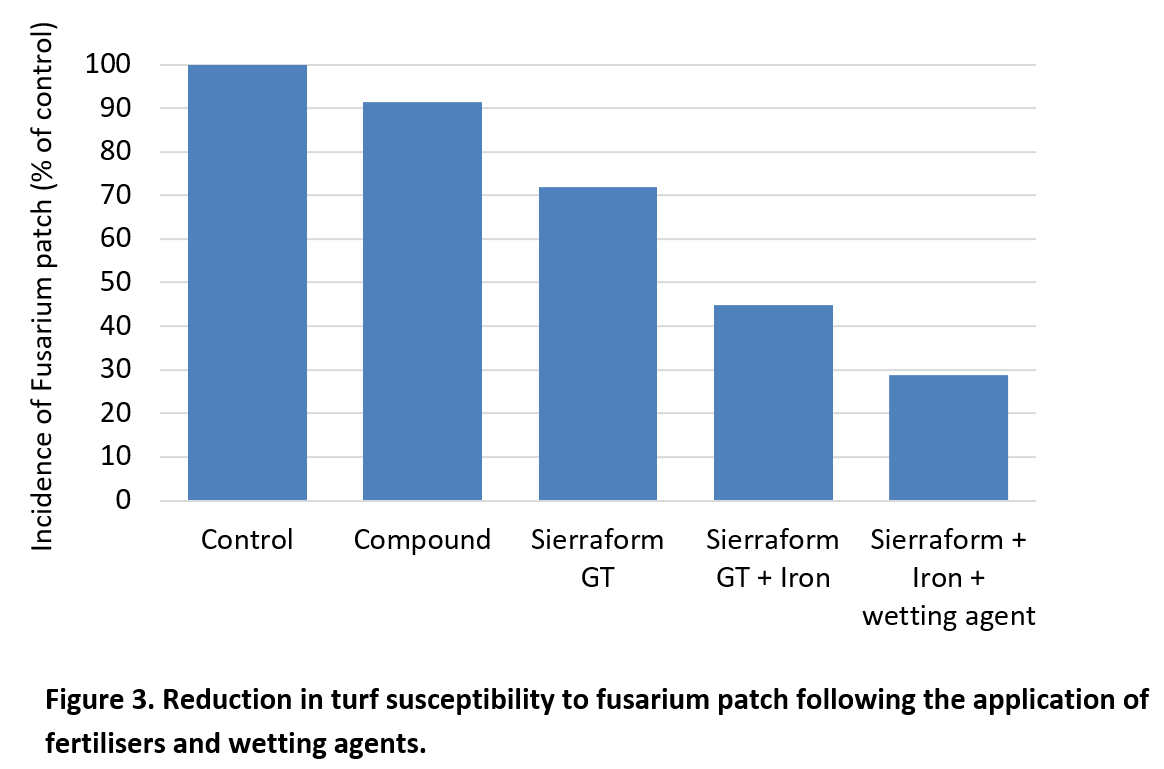 Low availability of sugars in the root system 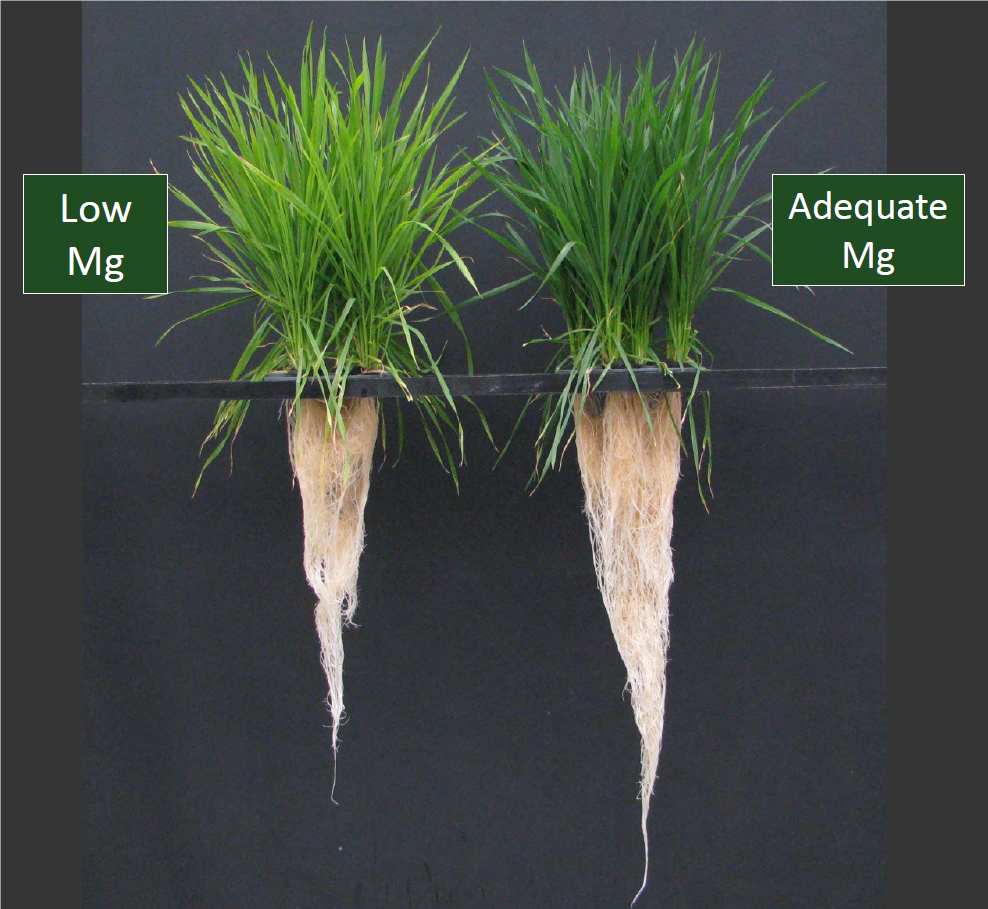 Turf managers routinely apply iron sprays or nitrogen to green up lighter coloured turf. However, additions of iron or nitrogen would not be treat the underlying problem if the chlorosis was due to Mg deficiency. Root growth cannot be easily observed from the surface and while iron treatments will green up the surface, the overall health of the turf will continue to be compromised. Turf can only be resilient if supplied with all of the nutrients that are required for healthy growth.

How much of each nutrient does turf require?

Critical values used to interpret leaf tissue tests have been derived from nutrient response trials. They can provide a reasonable guide to the amount of nutrients required by turf. Critical values indicate that healthy turf requires almost as much potassium as nitrogen (Table 2). The phosphorus and sulphur requirements are typically about one tenth of nitrogen and potassium (Table 2). Calcium and magnesium may be required in levels slightly higher than phosphorus. Nevertheless, the majority of turf fertilisers omit these last two nutrients. Additionally, it is common practice to apply high nitrogen fertilisers, such as urea and potassium sulphate, that do not contain potassium.

If not already present in the soil, sufficient nutrient should be applied as fertiliser. In a USGA style sand construction with a low cation exchange capacity, little nutrient will be inherently present in the soil and all of the required nutrient will need to be delivered via fertiliser. It is well known that high nitrogen fertilisers are commonly used to produce turf. Indeed, nitrogen can often be used to green up a surface. If products such as urea or ammonium sulphate are applied, similar levels of K and some supplementary Mg would also be needed to produce resilient turf, unless these nutrients are already supplied from the soil (e.g. some clay soils will provide sufficient potassium from weathering of the clay surfaces). Soil testing is an invaluable tool to determine what nutrients are already present and to determine what needs to be supplied.

To be compliant with Australian and New Zealand regulations, all fertilisers need to be labelled with amount of nutrients present on a percent by weight basis and in the elemental form. Overseas, fertilisers are usually labelled in the oxide form, which gives higher numbers for phosphorus, K, sulphur, calcium and Mg even though the same amount of nutrient is present. On world bags (labelled for Australia & New Zealand plus other countries) both the oxide and elemental analysis may be printed on the label (elemental is shown in brackets below as per the Australian labelling code of practice and always contains lower numbers for phosphorus and K) (Figure 5).

The labelled nutrient analysis contains three or four numbers separated by a hyphen or dash. The numbers represent the nutrient content in percentage by weight and are always in the order nitrogen – phosphorus – potassium (K). If a fourth number is present it will represent sulphur.

The amount of each nutrient applied can be calculated by multiplying the percent nutrient (from the label) by the amount of product applied (in kg/ha or kg/100m2). For example, if 100 kg/ha of the product shown in Figure 5 was applied, 15%N x 300 kg/ha = 45 kg N/ha. Using this calculation for each nutrient we can see that the fertiliser application would have applied 45kg N, 6.6kg P, 37kg K, 4kg Ca and 3.6kg Mg per hectare.

Note that the analysis of Proturf shown above (15-2.2-12.4 +1.4Ca +1.4Mg) contains a ratio of nutrients that is very close to the ideal for turf (Table 2) and also supplies calcium and magnesium. This product was designed to not only provide green turf but also to supply all of the macronutrients required to produce resilient turf, especially on sand based constructions or nutrient depleted soils.

The timing of nutrient delivery can affect turf resilience

Figure 6. Scored turf colour (A) and quality (density, uniformity) (B) during periods of cold stress following the addition of Sierrablen 4-5M controlled release fertiliser or conventional fertiliser in early June (beginning of winter). Values marked with a star ‘*’ were significantly different (P≤0.05).

Optimising root growth and root health is a key part of growing resilient turf. Significant time and expense is often invested in improving the physical properties of the turf root zone; from the creation of sand based constructions right through to management practices such as coring, thatch removal and the regular use of wetting agents. Adequate nutrition is also essential for healthy root growth in turf. While high nitrogen fertilisers and iron sprays are often applied to generate a greener coloured surface, these fertilisers alone are not sufficient to produce the healthiest most resilient turf.

Therefore, when reviewing your nutrient program, it is worth ensuring that:

A significant body of research has shown that investments in good nutrition results in healthier more resilient turf that is less susceptible to fungal disease and maintains improved condition despite environmental stresses.

Disclaimer: The content of this article should not be reproduced, linked to other sites or cited without prior written premission of the author and ICL. ProTurf® is registed trade mark by Everris International BV. For question or comments regarding this publication, please write to [email protected]