Set up by Gary Swaine in 1988, Four Crosses Nursery operates from a 13ha site in Powys supplying the UK wholesale amenity sector.  Very much a family-run operation, Gary and his wife Hazel work alongside their two eldest sons, Sol and Kai, while the two youngest - Zak and Eli - help out during the holidays.  As you might expect, there is a bit of healthy competition among the boys which proves useful during busy periods – such as at potting time! 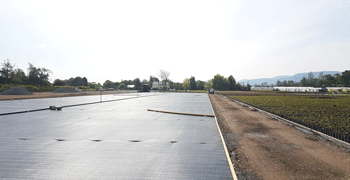 Up until March 2020, production at this busy nursery was heavily reliant on peat growing media.

“We’ve relied on Levington and Humax growing medias for some 20 years,” says Gary.  “Although we’ve trialled others, we’ve remained loyal due to their consistent high performance.

“Situated in a wet region of the UK and on a low flat site - our bespoke Levington Advance nursery stock mix is designed to be well drained.”

Aware of the need to reduce reliance on peat, at the beginning of 2020 Gary consulted with his ICL technical area sales manager, Steve Hughes.  After in-depth discussions he took the bold decision to switch all production to a peat-reduced mix - containing 40% Fibagro Advance.

Manufactured by ICL from sustainable, locally sourced materials certified by the Forest Stewardship Council, Fibagro Advance is highly consistent and performs well in most crop situations. It is ideally suited to container Nursery Stock and Pot Plant mixes.

When switching over to a peat-reduced mix, Gary admits to having had some concerns regarding water management, overall growth rates and Nitrogen lockup from the woodfibre and bark.

“Woodfibre and bark products are not as hydrophilic as peat,” says Gary. “Taking advice from Steve, we included ICL’s water management granules H2Gro in our mix and - keen not to over water - we’ve adapted and adopted a little and often watering regime.

“As to plant nutrition - while our new 40% peat-reduced mix contained the same Osmocote additions as before, Steve recommended a higher level of Nitrogen – to compensate for the wood products.”

Instead of using Calcium nitrate, which would be easily leached, slow release Osmoform High N is added to release the Nitrogen gradually.

Using ICL’s web-based AngelaWeb precision nutrition tool, Steve got to work devising nutrition programmes for the key crops - taking into account factors such as the water supply and the peat-reduced mix.

“Gary puts his trust in Osmocote High K with 12-14month longevity,” explains Steve. “Growing in a frost pocket, the High K produces hardier plants which helps prevent frost damage. On this nursery high Nitrogen products would give too much soft growth which would be easily damaged by frost.”

While the Osmocote High K is incorporated into the bespoke grown media mix, later in the season the Swaines supplementary feed, as necessary, using Universol Blue, Green and Violet products.

“At different times of the year, some programmes include Peters Professional and Agroleaf Power foliar feeds - especially on Buxus crops,” says Gary. “Employing the Angelaweb recommendations we feel we are optimising plant growth.”

Reflecting on his initial concerns when switching to peat-reduced, Gary says they have proved unfounded.  “Working with ICL’s knowledgeable team the results have been exceptional - crops are performed extremely well and we’re seeing noticeable improvements in overall rooting,” he says.

“As a bonus, we’ve also seen a 15-20% reduction in weeds - the drier mix at the top of the containers is preventing weed seeds from germinating.”

With confidence gained last year, for 2021 Gary has decided to reduce the peat proportion of his mix further to just 50%.

“In a bid to future-proof our production, we’re currently working with Steve to set up trials using 75% and 100% Fibagro mixes, containing revised fertiliser packages,” says Gary.

“Our aim is to become peat-free at a measured pace. At the rate we’re progressing we’re likely to achieve this ahead of the Government’s current industry target.

“To achieve this, we’ve remained loyal to ICL products. They have the capability and capacity to supply consistent product in the quantities we require throughout the season, we wouldn’t use them if they didn’t work well for us. We view ICL as a well-organized and efficient business and as a key partner. Going forward we want to grow more environmentally conscious nursery stock plants and become a more sustainable business.

“2020 proved a huge challenge for us – in particular, during the first lockdown, not knowing what was going to happen. However, as the year unfolded things gradually began to work out and we ended 2020 in an acceptable position.

“As to 2021, the UK’s recent exit from the EU is making things difficult in terms of cost and time scale for plant imports.  This is having a knock-on effect with more customers looking for UK-grown plants - which ultimately is good for UK production nurseries as a whole.”