As we strive to take better care of our water resources, all growers would do well to be mindful of the effects of nutrient leaching and the benefits of good fertilizer practice, says Andrew Wilson, ICL Technical Manager for Fertilizers.  In a bid to stay one step ahead of likely future legislation in regard to N leaching, ICL has taken the necessary steps to replace Calcium Nitrate Ca (NO3)2 in all its growing media mixes. 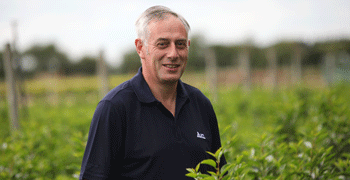 When it comes to base fertilizers, Ca(NO3)2 - also known as Norwegian Saltpeter – has routinely been added by growing media manufacturers to substrate mixes. It is there to provide a nitrogen (N) source to help stimulate good early plant growth.

These issues are exacerbated in sustainable growing media containing woodfibre.  N reserves tend to be depleted by the biologically active microbes, that take the ions up themselves; meanwhile these substrates tend to be more water repellent, ie have a lower water holding capacity – which increases leaching potential.   Of course, the inclusion of a quality wetting agent in the growing media mix, such as H2Gro, can help mitigate this.

Two other commonly used sources of N in horticulture and agriculture are urea [Co(NH2)2] and ammonium nitrate.  Compared to calcium nitrate, urea is formed of a longer chain; slower to break down, the leaching risk is reduced.  However, this process requires biological activity and in cold temperatures can proceed too slowly to be effective.

Precision Nutrition with new base fertilizers

Our two new base fertilizers – Osmocote N and Osmoform High N - promote higher nutrient efficiency in the early stages of plant growth, while being better for the environment due to reduced leaching.

For short term crops, Osmoform High N is a slow release fertilizer with a long chain that breaks down slowly and is not water soluble.  While the N release is influenced by temperature, microbial activity and humidity, Osmoform High N breaks down steadily over an 8-10 weeks period making it ideal for bedding crops and some perennial and container grown nursery stock.

The fine granules are easily incorporated into growing media mixes and the 7.5% urea is readily available, generating a quick response in the plant.  Meanwhile, the 30.5% Urea formaldehyde becomes available more slowly as it has a longer chain.

For a complete precision nutrition programme, these new base fertilizers can be combined in growing media mixes with Osmocote 5, and other products from the extensive Osmocote range, to deliver exactly what the plant needs throughout its growth cycle on the nursery, in the retail outlet and beyond.

Currently the Nitrates Directive limits the volume of nitrates that can be applied to certain crops. It protects nitrate vulnerable zones (NVZs) – areas designated as being at risk from agricultural and horticultural nitrate pollution.

At present, plants grown under protection, such as in glasshouses, are exempt from NVZs.  However, the remit could be extended – particularly now there is increasing emphasis on environmental issues. As such, growers need to be ever mindful of the impact their growing practices can have on their nurseries’ surrounding environment.