Applying the correct level of nutrients, especially nitrogen, to a fine turf surface or sports pitch is essential to maintaining a healthy sward capable of supporting play and withstanding environmental stresses. Too little nitrogen and the turf will lose colour, thin out, become weak and vulnerable to attack by pests and diseases, and weeds and moss will start to invade.  Too much and you may induce soft growth and deplete carbohydrate reserves, again leaving the plants susceptible to pests and diseases as well as environmental stresses triggered by heat and/or water.

Applying too much nitrogen fertiliser also runs the risk of losing a certain proportion to leaching and denitrification, which is an expensive waste of vital resources.  Understanding the nitrogen-cycle and how nitrogen can be lost is vital to optimising your fertiliser usage and will help you minimise losses and reduce potential contamination of the local environment. 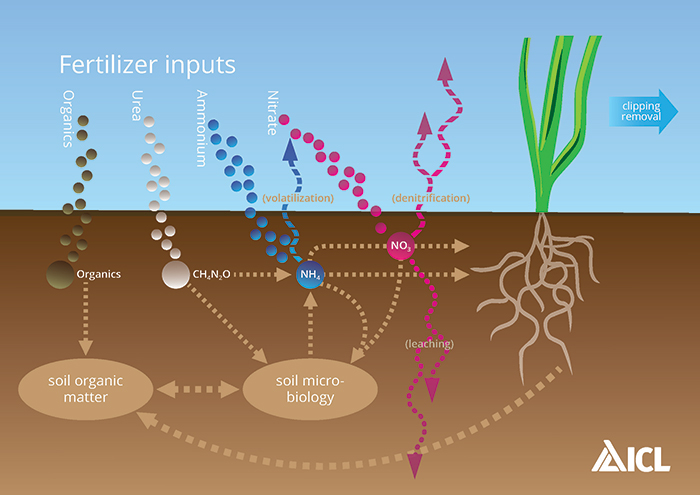 What is the Nitrogen Cycle?

As turf professionals, we all know that nitrogen is the main macro-nutrient required by turf for growth.  It is all around us in the air we breathe but it cannot be utilised directly by turf plants to produce protein.  Most nitrogen is taken up by plants in its oxidised form, nitrate, but ammonium can also be taken up.  Nitrogen is converted to ammonium and nitrates by processes within the soil as part of the nitrogen-cycle.

To fully understand the processes involved in the nitrogen cycle it is perhaps best to break it down into four different stages:

Inputs: if the turf is taking up nitrogen it needs to be replenished:

In an unmanaged system this is cyclical.

In a managed system, turf growth and N supply is manipulated.

Conversion: the nitrogen cycle is all about microbial transformation, in simple terms:

There are a number of ways which nitrogen can be lost from the system.  Leaching is probably the most prevalent, depending on circumstances, but denitrification, volatilization and losses through the removal of grass clippings will also play some role.

Increasing your understanding of the nitrogen cycle and the potential losses that may occur is a positive step to minimising nitrogen losses and has the potential to save you unwanted expense at the same time as potentially improving your playing surfaces.  There are a number of steps that you should consider when formulating a fertiliser programme and these are outlined below:

In summary, nitrogen is essential for plant growth but is particularly vulnerable to losses via leaching and denitrification if misapplied.  Taking time to carefully consider your choice of fertiliser, dosage and mode of application is critical to reducing these losses and should help you to minimise expenditure whilst also improving your playing surface.  Using a coated fertiliser or controlled release granule (CRF) can drastically reduce leaching losses and denitrification to the environment and so provide a healthy, good quality turf with optimum inputs.