Uniquely for a coated fertilizer, Osmocote 5 contains trace elements in chelated form. But what are chelates and why is this an advantage for the latest sustainable reduced peat and peat free growing media – ICL’s Technical Manager Andrew Wilson explains.

Micronutrients - as important as major nutrients

Let’s look at trace elements first. Often called micronutrients, they are required by the plant in very small amounts compared to major nutrients such as Nitrogen.  Indeed, for every 1 molecule of the molybdenum required by a plant, 1 million molecules of Nitrogen are needed.

However, trace elements are just as important to healthy plant growth, with many common deficiency symptoms due to poor availability. While they may be present within the growing media, trace element can be locked up due to higher than optimum pH levels.

pH readings are commonly higher in peat reduced/free growing media - a problem exacerbated by hard water irrigation. As a result, many trace elements become unavailable - locked up in the media.

To overcome this issue, trace elements such as Fe++ (Iron), Cu++ (Copper), Mn++ (Manganese), Zn++ (Zinc) can be chelated. Chelates are negatively charged, organic molecules that hold trace elements, such as Iron, keeping them in solution.  The chelate then releases the iron to the plant root hairs, even if the growing medium pH is high.

There are many different types of chelate, some are natural such as humic and citric acid. The type of chelate used in Osmocote 5 is EDTA. I’ll stick to the abbreviation as the full name, Ethylenediaminetetraacetic acid, is a mental and verbal challenge!

EDTA has a much stronger, four claw, grip on the trace element compared to natural chelates - which only have three claws. This means EDTA can hold onto the trace element at the higher pH’s seen in sustainable growing media mixes containing less or no peat. 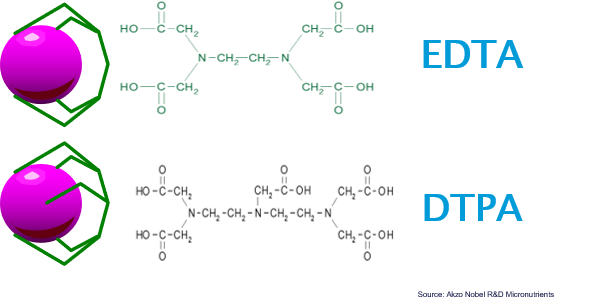 When chelated by EDTA, Copper, Manganese and Zinc are made available to the plant up to pH 10 - more than enough for container production.

However, if the pH rises above 6.5 - typically due to long cropping systems supplied with very hard water - then Iron deficiency can still occur. In this situation, a Peters Foliar Feed containing an even stronger chelate, DTPA, can be used to correct the deficiency. DTPA has a five claw structure holding the iron molecule strongly up to pH 7.5

Chelates keep trace elements available in solution for uptake by the plant, so they tend to more readily leached. They are commonly used in water soluble fertilizers which need to be regularly reapplied.

In contrast, Osmocote 5 is a controlled release fertilizer.  As such it continually releases trace elements in line with temperatures and plant growth requirements.

To finish, I’ve summarised the clear advantages of employing chelates in Osmocote 5 – which explain the enhanced green foliage seen in our trials.

All Osmocote 5 granules contain a full trace element mix leading to an optimum spread and efficiency.