Switching from two manual applications of a partially coated controlled release fertilizer to a single automated application of Osmocote PrePlant (Nursery)*, CGJ Mathias & Son Nurseries have simplified and improved the efficiency of their field-grown hedging.

Operating as Hedgesonline.com, CGJ Mathias and Son Nurseries remains a family run nursery. Brothers Tom and Will Mathias are third generation growers, with their parents – Bob and Jane Mathias – the driving force behind the original success of the hedging business. 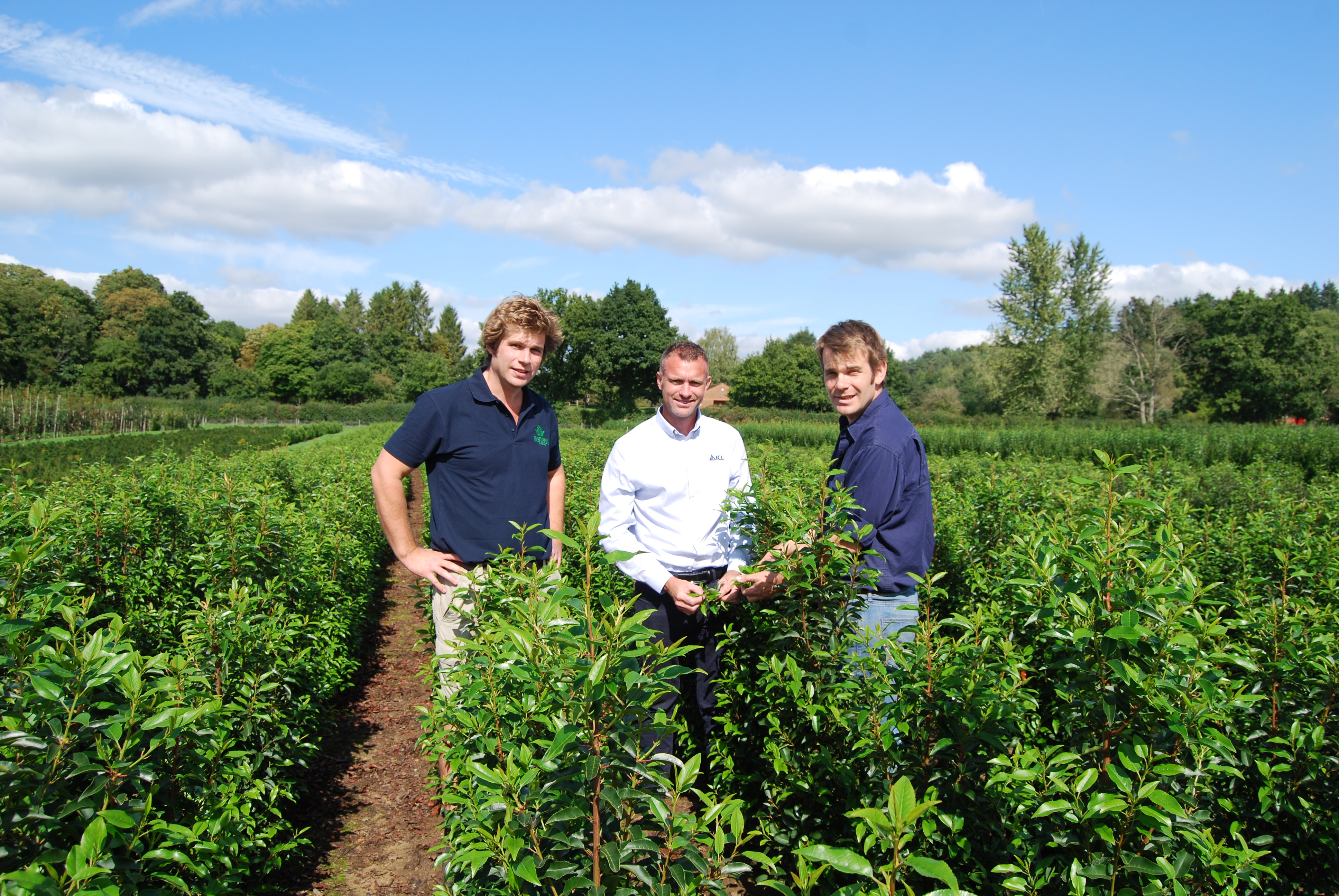 The nursery is well-positioned close to the M25 at Farnham, in Surrey. Alongside 10 acres of container production, the picturesque site currently includes 20 acres of field-grown hedging and trees. With a strong online presence, the nursery supplies landscapers, property developers, councils, schools and garden designers nationwide, as well as the general public.

“Selling in the region of 200,000 hedging plants a year, our core lines include Leylandii, Laurel and Taxus,” explains Will Mathias, sales and marketing manager. “Production is evenly split between root ball and container-grown stock.  Some smaller hedging plants are produced in 3-4litre pots, with the vast majority in 7, 15 or 25litre pots and larger hedging in substantial 45litre containers.”

“We’re growing more and more native UK species,” says Will.  “We’re also expanding our field-grown production – three years ago we had five acres, this season it will be over 20 acres in production.

“Growing more of our own is helping reduce reliance on imports.  Alongside the rising costs of bringing plants into the country - not least transport costs which have increased dramatically over the last year but also administration and customs agent costs which have increased by £200 a lorry load - with Brexit there is a lot more paperwork and stringent Plant Health notification procedures to factor in.  These all take time.”

“In the past, in our field production we used to topdress with ICL’s Agromaster,” explains Tom Mathias, production manager. “A partially coated controlled release fertilizer, with a 5-6 month release pattern, it worked well. However, with stock in the ground for two years on average, we had to make two manual applications over the production cycle.

“With our sandy soil, there is a potential for nutrients to leach.  The risk is increased as some of our fields are on a slope, so round prills applied to the soil surface can be easily washed away. With the rise in sudden adverse weather events, this has become a real risk.”

Today the brothers rely on Osmocote PrePlant (Nursery) a fully coated controlled release with an NPK of 17-8-10 +2MgO and a full trace element (TE) package.

“It’s ideal as it lasts a good two seasons,” explains Tom. “We can programme our planting machine to automatically drop a set dose of Osmocote PrePlant into the planting holes after drilling.  This means the prills sit under the plant roots in the damp soil. During the warmer spring and summer months, they slowly release providing nutrients where they are needed - where the roots can easily take them up.”

“A controlled release product, as the temperature rises nutrient release increases – in line with plant growth,” explains ICL’s technical area sales manager Steve Chapman. “When topdressing in the past, the fertilizer was also feeding the grass and weeds.

“With sandy soil, the nursery has a high risk of N leaching.  Due to the fully coated nature of the Nitrogen in the PrePlant, N losses are reduced; compared to a conventional N fertilizer the efficiency of the release allows a 50% lower N application rate.”

Steve goes on to say that traditional dual application of simple uncoated fertilizers can leave gaps in the nutrition for evergreen crops. “Osmocote PrePlant, with its sophisticated controlled release pattern, helps eliminate these gaps ensuring evergreen crops have access to the appropriate nutrition they need year-round.” According to Tom, switching has greatly simplified and improved the efficiency of the nutrition programme. “We make one mechanical application at planting which lasts two years, saving valuable time, labour and hassle,” he says. “Our tractor mounted planting machine has automated the task of fertiliser application so we can effectively forget about subsequent applications for the next two years.

“We’re keen to mechanise where we can.  Our planter was custom built on the continent and we can accurately vary the Osmocote PrePlant rates planting depending on the crop type and production cycle.” 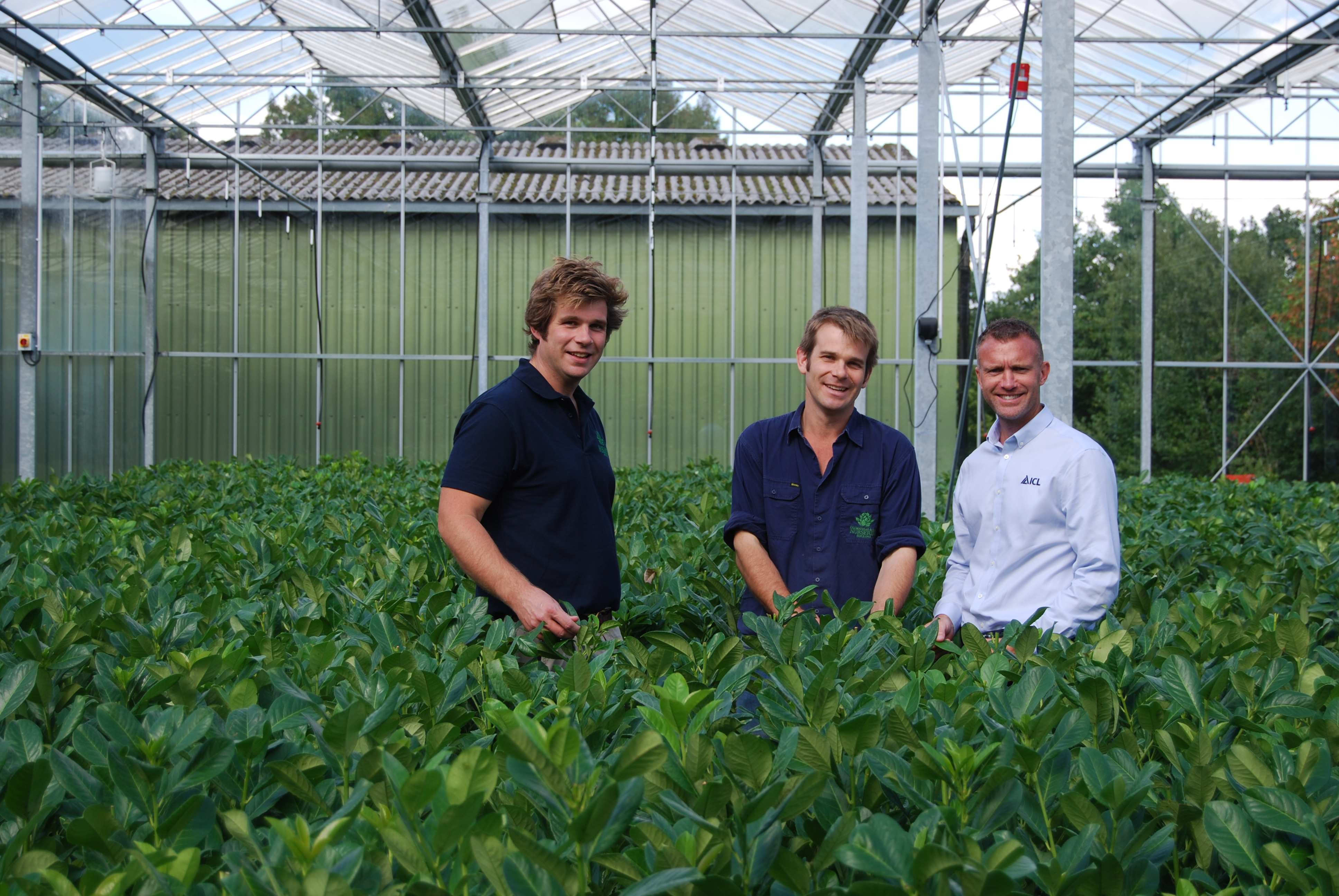 In the container grown stock the brothers rely on Osmocote Pro 12-14 months.

“We mix our own 40% peat-reduced growing media on site,” says Will.  “We add Osmocote Pro and Micromax Premium - which contains the full range of trace elements. While ensuring the plants aren’t short of any of the minor elements, such as Manganese and Copper, it includes 15% Iron which guarantees cost effective greening and improves the ‘shelf-life’ of our hedging products.

“For faster growing vigorous varieties, such as Laurels, Osmocote CalMag is added to the growing media mix.  This gives these more vigorous crops additional Nitrogen over the 3-4 months as well as Calcium and Magnesium.

“Although we’re not selling to garden centres, we’re confident our plants are the highest quality you will find anywhere and will go on to perform well when planted in their end position.  We want to do everything we can to give our plants the best start in life and the Osmocote products help us achieve this.”