For nearly 15 years, agronomist Ward Gunter has been part of the team that helps bring our flagship specialty fertilizers to American growers. As our Eastern Region Agriculture Sales Lead and Business Development Manager, he supports a sales team and helps growers develop efficient nutrient management programs. But that wasn't always Ward’s plan.

Born and raised in Vero Beach, Florida—where he and his family live today—Ward always expected he’d work alongside his father in the family’s citrus grove and packing house. An eighth-generation Floridian and a fourth-generation farmer, he learned the business from an early age, working side-by-side with hand laborers in the grove.

But to Ward's surprise, graduating from the University of Florida’s College of Agriculture didn't yield a spot in the family business. Instead, his dad said he hadn’t sent him to college so that he could come home and work for him. “At the time, I was devastated,” Ward recalls. “But that's when I found my way into working in a precision ag consulting role.”

Straight out of college and back in Vero, Ward was hired as a precision agriculture consultant for one of Florida's largest citrus growers. There he helped develop the first variable root stock grove—the most technically advanced grove of its kind at the time. Next, he managed 2,000 acres of export-grade grapefruit for another large, multi-generational citrus company.

When the University of Florida needed someone to develop and implement best management practices (BMPs) for citrus growers, Ward topped the list. The University honored his first year’s work with a superior accomplishment award. By the end of his third year, the program encompassed more than 500,000 acres of groves. Those BMPs were later implemented in many other programs across the state, from nursery stock and sod to vegetables and cattle.

Ward’s 2006 transition into fertilizer sales came naturally. “With anything you do in life, you have to sell yourself and establish credibility to build relationships, so it wasn't hard for me to move into sales,” he says. The challenge was a shift to ornamental horticulture instead of ag. Fortunately, he inherited his mom’s robust love of ornamental plants and used that to his advantage.

But Ward soon saw an opportunity to grow a new segment of business by introducing farmers to the controlled-release fertilizer technologies used in ornamental horticulture. While still growing his hort accounts, he built the new ag segment to more than a half-million dollars that year. He earned a company Award of Excellence—and a full-time spot back in agriculture. Since then, he’s played a vital role nationwide integrating enhanced efficiency fertilizers into agricultural and horticultural crops.

The most satisfying part of the job in Ward’s eyes is helping busy farmers cut through all the “silver bullets” and empty promises in the marketplace and get to the core of what growers truly need. “The thing I enjoy most is working with people—being valuable, helping people be successful, seeing them grow a beautiful crop, and knowing that crop is going out to nourish Americans and people globally,” he shares.

Ward points to rapidly increasing global population and decreasing land for crops. “We have to become more productive on fewer acres and feed more people while not polluting the lands that we're using,” he says. “Integrating technologies such as controlled-release fertilizer that allows you to scale the rate back 50% and grow two seasons on the same amount of inputs that you would in a single season—that’s sustainability.” 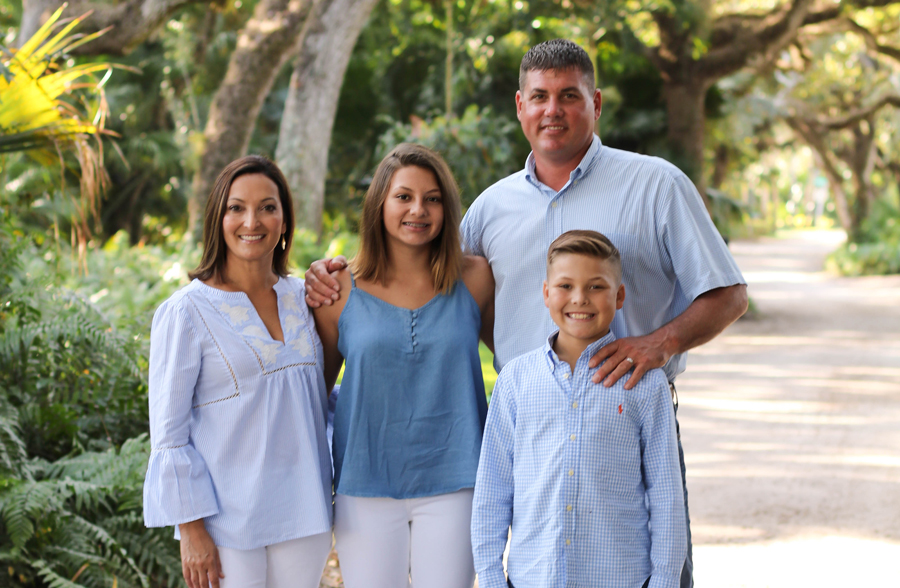 Ward’s love of family and the outdoors are constants in his life. He enjoys hunting, fishing, and spending time with family. Being outdoors with his wife and college sweetheart, Ursula, and their children, Lily and Tripp, dominates his recreational time. “Everything I do, I do with my family. I'm just blessed,” he says. “If I'm not around my children, I just feel like a piece of me is missing. So family is key to me.”

Not surprisingly, Ward’s respect for family spills into his work. “We should treat our customers and our distributors like family, because they're the ones that are responsible for our success,” he says.

“If you do the right thing and treat your customers with respect and ensure that everything you're recommending is for their well-being, then you're going to establish a relationship with them that will be unbreakable. That's what’s going to ultimately lead to your success and growth.”

At ICL Specialty Fertilizers–Americas, we believe those are more than just words. Your success is our success. Let us help you grow your crops and your business. We are partners in growth.