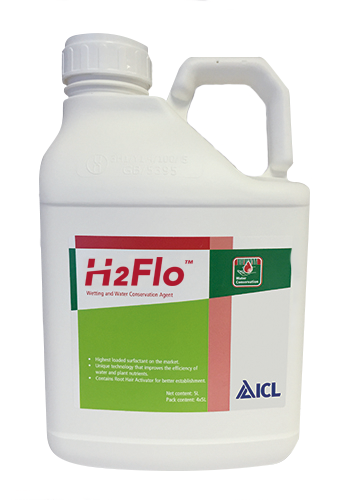 More information about H2Flo click here to go to the product page.

The unseasonably dry weather this summer has forced many farmers to irrigate large proportions of their crops, but with the dry spell set to continue, there’s a chance that a lot of the irrigation water could be lost by evaporation, which will become costly for the farm.

However recent trials at UK University Aberystwyth have shown that use of a water conservation agent can drastically reduce loss of water from soil surface evaporation, because surface pooling is reduced by 30%, when compared to untreated soil.

“The results also suggest that because H2Flo allows water to penetrate the soil further, both vertically and laterally, heathy root development is encouraged,” says Scott Garnett, senior agronomist from ICL.

It’s becoming essential for farmers to save water where possible, especially this year where we have seen less than 10% of the expected rainfall since the start of March.

But because H2Flo reduces water evaporation and maximises its spread, those applying it to root crops and potatoes can expect to save up to 25% of irrigation water, which will greatly reduce both water and pumping costs.

“H2Flo is made up of a blend of surfactants, which can be used to make this water available to the plant. Surfactants enlarge the spread of water by increasing the speed that the water molecules penetrate the soil. This allows them to travel below the first five centimetres of the surface faster than normal, minimising loss by evaporation,” he says.

“Because the organic compounds in the soil are oil based and hydrophobic, they do not mix well with water, making absorption into the soil difficult and slow.

“But the technology in H2Flo breaks down the surface tension in the water, so that it can combine with the organic matter; making it more accessible to the plant.”

Scott explains that the soil’s water to oxygen balance is also managed by H2Flo, holding water in the rootzone, which gives the plant more opportunity to develop a larger root system, as roots will only grow where water is present.

“To put it simply, the wider the water is spread, the greater the root mass, which is indicative of a productive plant,” adds Scott.

H2Flo is an unique blend of surfactants especially designed to move water and fertilizers quickly and efficiently through different types of soil. The advances made in surfactant technology mean that this product leads the way in water conservation and provides growers and farmers with the most advanced wetting agents available.

The product can be applied as an initial wetter and also during the normal irrigation cycle where it will also aid the movement of fertilizers throughout the soil therefore balancing the EC levels. H2Flo also prevents the hardening of water repellent deposits.