Last year we conducted the first of a series of trials to test the relative merits of employing liquid and/or granular fertiliser strategies for golf greens. Whilst we are at the early stages of this work, we felt that the initial results were interesting enough to report and hopefully stimulate some debate. It’s what we do.

In recent years golf green fertiliser programmes in the UK and Ireland have moved towards a greater reliance on liquid/foliar feeding, with granulars generally only being reserved for the spring and autumn (if at all). There are lots of reasons for this shift toward a “little and often” or “spoon feeding” liquid applied approach, such as, giving a greater level of flexibility with inputs, the convenience of tank mixing to dovetail with the application of other liquid technologies such as wetting agents or plant growth regulators, achieving more consistent response patterns with more regular applications, less disruption to the surface preparation routines etc. Liquid nutrition seems to fit better with modern golf green management strategies.

As one of the market leaders in the production of turf nutrition technologies, ICL supply liquid, soluble, conventional and slow release granular fertilisers and so we are able to support all approaches to greens nutrition. But when making recommendations for turf nutrition programmes we want to ensure that we are giving the best advice. We know that the move towards a greater reliance on liquid feeding is driven from good reasoning, but is it the best approach agronomically? Are there any downsides?  So, in order to shed some light on this subject we embarked on a series of field-based trials beginning last year.

This initial trial was situated at Hart Common Golf Club near Bolton (thanks to Richard Roberts and his team) and ran from April to October 2017. Four treatment schedules were employed (untreated, liquid-only, granular-only and a mixed programme employing both granulars and liquids with the granulars being applied at the start and end of the season and the liquids in-between). The trial was situated on a sand-based green and set up as a randomized plot design with 4 replications to allow a robust statistical analysis of the assessment results.  Assessments were made on a weekly basis for turf colour (1-10 scale), turf quality (1-10 scale) and NDVI, with additional assessments being made for turf stress, root development, % moss infestation and % disease activity when relevant. We tried to set up the trial in a way that would give us a good reflection of the turf responses through the duration of the trial. 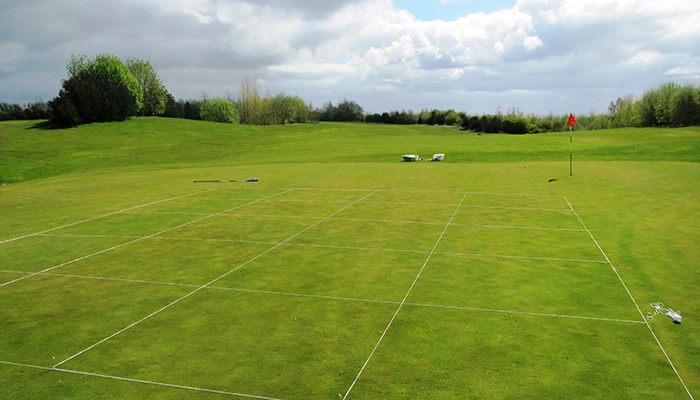 In terms of the treatment schedules, the granular-only programme involved four applications of micro-granular conventional and slow release technologies at 6-8 week intervals. The liquid-only programme employed 7 monthly applications. The granular plus liquid programme started off with a conventional granular in spring and then 7 monthly liquid applications finishing off with a granular in autumn.  Each approach applied the same level of Nitrogen (120 kg/ha), Phosphorus (12 kg/ha) and Potassium (120 kg/ha) in various different forms.

The turf colour responses highlighted the peaks and troughs associated with fertiliser applications. The more regular liquid applications resulted in a greater level of consistency but there was still a gradual decline in colour towards the end of each month. Interestingly, the overall colour score averages for the whole season were the same for each approach (6.4 out of 10) with them all applying the same level of Nitrogen. In this year’s follow-up trial we have employed increased application frequencies at lower rates for each approach to try to achieve more consistent turf colour responses.

The turf quality assessments took into account turf colour, density, consistency as well as weed and disease ingress.  The main factors affecting turf quality were the positive impact of nutrition as well as the negative influence of drought stress, poor recovery from maintenance operations, moss ingress and Microdochium patch disease. The development of drought stress seemed to be increased under the liquid-only programme but the results were not statistically significant enough to draw solid conclusions. The development of moss in early autumn was significantly related to the treatments, with the liquid-only plots sustaining a greater level of moss ingress than the granular or granular/liquid programmes. The liquid-only plots also sustained a significantly greater level of Microdochium patch disease in the Autumn.  These turf quality attributes will be studied with an increased level of scrutiny in this year’s trial to see if we can gain a greater understanding of the situation.

The rooting data was inconclusive, probably due to the sampling methodology. Three core samples were taken from each plot on 2 occasions during the course of the trial with the rootzone being washed off and average root length measured.  On each occasion the granular-only plots had a greater average root length than the liquid-only plots but the results weren’t robust enough to be statistically significant.  In this year’s trial we will be employing more comprehensive measurements to be able to draw more solid conclusions.

So, although this trial is just our first attempt to understand the influence of liquid and/or granular approaches to turf nutrition, we felt that the results were interesting enough to report. There were certainly limitations with the trial set-up and design, which we will improve with future trials but there were some good pointers here for us to pursue.  All trials tend to raise more questions than they answer, which is why we need to commit to research over a period of years to gain a full understanding. From this work it appears that there may be some disadvantages to taking a liquid-only approach, but let’s not draw too many conclusions just yet.  At ICL our aim is to provide the best advice when it comes to the use of our technologies and so we will continue to invest in credible and interesting research work that helps us all become better at what we do.